Connecting With the New Generation

In its role as EU Commission Climate Ambassadors, ETSA held its second Peer Parliament in 3 months, this time on  the morning of Friday, April 8th . This Peer Parliament looked to build off of the excellent work done in the first and its focus was centered around the idea of "sustainable consumer behavior meeting textile services." A group of 23 young professionals and 3 CEOs of ETSA member companies gathered together (albeit virtually) to discuss the relationship between the future of the textile services industry, consumer behavior, sustainability, and circularity.nThe event was organized into three workshops of equal length. The first of these featured a guest speaker, Katerina Fortun, a Policy Analyst working on Adaptation to Climate Change at the European Commission, and was moderated by Dr Maren Otte, the Director of Corporate Communications & Corporate Responsibility at CWS , the fundamental question which formed the basis of this workshop was "What can individuals do in their daily lives to promote the Circular Economy and sustainability?"

Ms Fortun gave an opening address to ETSA's young participants where she  sought to answer this question. She emphasized not only adapting to the "new normal" and the reality of climate change, but actively undertaking sustainable activities both at home and in one's professional life. These small-scale sustainable activities can be on anything from electing to use less water, using greener transport and indeed supporting the usage of higher quality and repairable products. This discussion was widened upon in the context of textile services, as the European Commission, and National Governments take more of a stance in combatting planned obsolescence, a rental and service-based business model will not only be more advantageous in terms of carbon footprint, but will also be more economically lucrative as well. 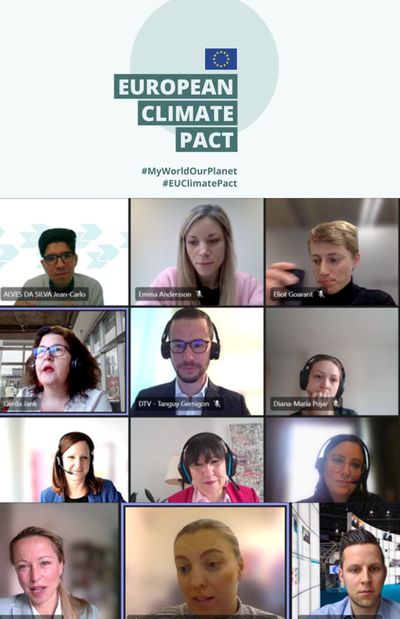 This discussion continued and the group dove deeper in the 2nd workshop, which was moderated by Gerda Jank, the Director of Communications at Jensen Group. Here, she moderated a dialogue which incorporated visual stimulation of current events and pressing issues, including the war in Ukraine, microplastic pollution and chemical dumping, with an interactive dialogue designed to make the young participants think of their role in the textile services industry, and what that means going forward in a world where sustainability and environmental consciousness will be all the more important, without of course forgetting the interlinkages the industry has with other salient world events. The discussion also showcased the deep (and sometimes unappreciated role) textile services play in day to day life, in everything from cleanroom, hospitality, healthcare and even more.

She emphasized in the discussion, that as young participants in the textile services industry, they are all in a sense, not only ambassadors for the industry itself, but for a more prosperous and clean way of living in the future, as they will be the ones inheriting the planet. Building on the momentum of the previous two, the  third and final workshop featured a reverse interview with ETSA CEOs. During the registration process, our young participants were asked to submit sample questions to the ETSA CEOs, on any subject matter they thought relevant to the discussion. The questions were then categorized and asked directly to the CEOs from the Moderator, who for this last workshop was ETSA Secretary-General Elena Lai. The three CEOs participating in this reverse interview were, Andreas Holzer, the CEO of Bardusch and ETSA President, Jurgen Höfling of CWS Group and Jesper Jensen of Jensen-Group respectively.

The first series of questions from the participants, which was asked to the CEOs, dealt with how they perceive the future of the textile services industry, the role EU politics and national politics plays in their jobs as well as how they can, in their position of power ensure that sustainable goals are met and that future green ambitions and goals can be reached. As the discussion continued, the moderator, Elena Lai began asking progressively more difficult questions ranging from how digitalization can advance sustainability, the current Russian-Ukrainian war and subsequent rising energy costs, among other relevant topics. The three men answered the questions with calm, resolve and resourcefulness, emphasizing not only the important role the textile services industry plays in Europe, but its need to evolve, adapt and include the voices of younger people. This Peer Parliament brought together the current and future generations of the textile services industry with an insightful and productive dialogue. While sustainability and environmentally conscious behavior starts on the individual level, ETSA and its members are committed to doing our part to work toward a greener and more sustainable world for future generations. It is for them, the younger generation that the European Commission, declared 2022 to be the "European Year of Youth" in order to emphasize a greener, more inclusive future. ETSA would like to thank all of its young participants who attended the event, as well as the Katerina Fortun, the moderators, Dr Maren Otte, Gerda Jank and Elena Lai, as well as the three CEOs, Andreas Holzer, Jurgen Höfling and Jesper Jensen. A recording of the third and final workshop is being edited and will be on the ETSA website shortly. We at ETSA are looking forward to hosting another Peer Parliament during the ETSA Congress in Rome next month. Further information on that will follow shortly. A great and productive event!